In the following I describe my experiences as a medical doctor in my work with patients. One could also take Person X and Person Y as the Sensitivity test can be done by every person. The intensity of the information signals felt by participants solely depends on the difference in the energetic potential of the participating subjects. The balance between energetic potential and the programme for cellular regulation decide our physical, mental and social well being.

In my clinical practice the sensitivity test is the first and preparatory diagnostical step to examine the threshhold for sensing FRONTODUALE INFORMATION FIELDS . The test is standardised and has already been performed ca. 2000 times.
The sensitivity test consists of several individual tests. The patient is seated on a swivel chair, facing the doctor, his arms hanging down in a relaxed position by his side. The practitioner now tests whether the patient feels on the inner sides of his spread hands "prickly" information signals (time delayed in a sinus curve), or warmth and cold. If the answer is positive the patient is turned by 180 Degrees, i.e. away from the doctor. If the information signals are disappearing now, the patient can be classified as "sensitive". We are looking ere at a basic instinct, which warns the prey of the frontal approach of the predator.

After having been questioned about the information signals the patient is asked about changes in his sense of gravity ( sense of gravity= a kind of "ebb and flow" of the water column of the body ). When he is facing the doctor the patient mostly reports an increase in gravity (depressive information direction), this changes to a decrease in gravity after a turn by 180 degrees i.e. away from the practitioner. The patient describes this regularly as "lightness" (euphoric information direction). In rare cases is the perception of the patient inverse.
Tests also include the information flow on the sides (45 degrees). The patient senses the difference between the dominant and sensitive side of the body, i.e. he realises which side he has to protect in relation to information signals and which side can protect him. If the questions are repeated at short intervals the intensity of patient reactions diminishes.

The CHILD- SYNDROME from the perspective of human cybernetics:

The dominant and the sensitive half of the human body are bilaterally regulated by two autonomous programs of self-healing. The self-healing potential of the cell depends on the balance between the regulatory energy of the cell and the regulation program of the cell.
The biological cybernetic imbalance between the two halves of the body is natural. Nature provides for a certain biological room for maneuver regarding the regulation of energy. Only when this range is not maintained will the human body become sick.

The CHILD SYNDROME represents an extreme case of imbalance. 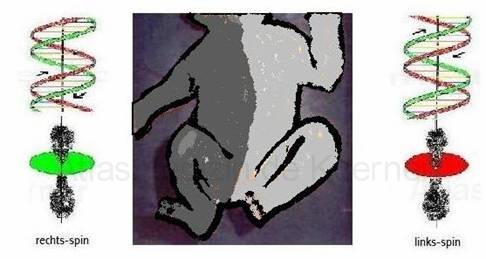 CHILD stands for "Congenital Hemidysplasia with Ichthyosiform Nävus and Limb Defects", Features of this syndrome are a one sided hypoplasy of the brain,the lung, the heart and the skeleton together with an ipsilateral inflammatory naevus of the skin. Only girls survive with this genetic defect.

A video proof of a strong non-material attraction between the 3 floating Kölsch glasses via the repulsion attraction force field (RAF) of the water layer at the interface? 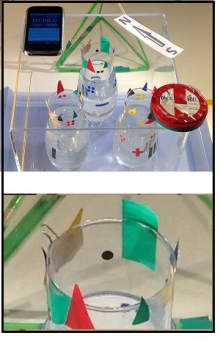 Experiments with the magnet:                     The prepared glasses set up in an equilateral triangle are positioned under a hermetically sealed glass case. If you move the magnet on the surface of the glass case, the evidence of the attractive forces between the Kölsch glasses becomes visible.

Is the decisive factor here a  repulsion- attraction force field (RAF) of the water at the interfaces of the Kölsch glass and the Pils glass?