The "Pilsglassexperiment" by Herbert Koerner

Excerpt from the online magazine psychophysik.com
by Claus Fritzsche

Dr. Herbert Koerner, Berlin has applied for a patent for the experiment described below on March 16, 2005. Its title is "Mechanical Signal Transmission System". An explanation based on physics is still missing.

The German Patent and Trade Mark Office has published the patent application describing the "Pilsglassexperiment" on September 29, 2006 under reference number
http://www.patent-de.com/20060928/DE102005013203A1.html 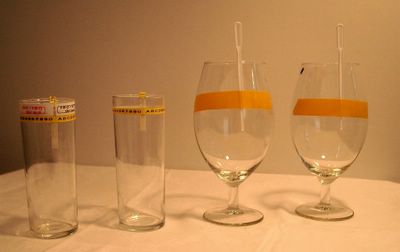 Picture 2 shows that the "Koelschglasses" automatically seek a position in the centre of the "Pilsglasses". At the beginning they will still move in different directions. It can last up to 30 minutes before the "Pilsglasses" come to a standstill. Therefore one has to make sure that the "Koelschglasses" have been stationary for 10 minutes before the experiment can be started. 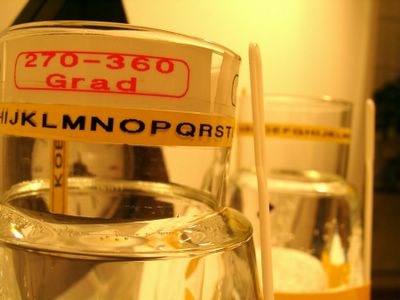 The actual "Pilsglassexperiment" of Dr. Herbert Koerner consists of giving one of the "Koelschglasses" a clear angular momentum, so that it rotates around its own axis several times within 5 to 10 minutes (picture 3).

Note: with this behavior of the water explains why submarines faster underwater are as above water. 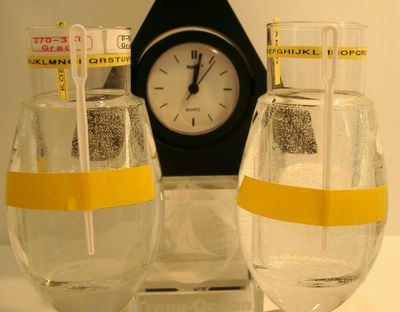 The following phenomenon requires an explanation: If the "Pilsglassexperiment" is performed as described above, there is a high probability that also the second "Koelschglass" which had not been touched, will rotate. This rotation of the untouched "Koelschglass" usually only starts after 5 to 10 minutes, i.e. at a time when the other "Koelschglass" that had been touched, only has a minimal rotation left, no longer visible with the naked eye.
The nature of the rotation is highly variable. In the majority of cases - after several minutes of standstill - it suddenly rotates minimally during several minutesThis happens in such a discrete manner that the movement cannot be seen by the naked eye without a measuring device. Number and composition of the observers as well as their respective position in the circle can influence significantly the angle of rotation of the "Koelschglass". Sometimes there is no rotation at all. The rotation can be very minimal (e.g. by only 1degree) or be clearly visible (e.g. by 15 or even 30 degrees). Sometimes it appears as if forces balance each other. The "Koelschglass" that has been moved manually as well as the one that has not been touched rotate at first for several minutes in the same direction and then for some time in the opposite direction. The reverse rotation of the "Koelschglass" that had been moved manually (which before had rotated several times around its own axis) is very discrete (maximum 15 degrees}. This can result in a sort of pendular process, by which the "Koelschglasses" change direction more than once at a speed that is no longer visible for the naked eye. It has been shown that the effect is significantly more pronounced when still water is used (e.g. Volvic).

During a presentation on April 21 2006 at Mr. Koerner's in Berlin the physicist ,Professor Martin Lambeck explained the phenomenon (in the presence of "ZEITWissen" editor in chief Christoph Droeser and a representative of "vdi Nachrichten) by the principle of "coupled oscillation". This explanation is incorrect, as a solid medium for the coupling is missing (the "Koelschglasses" are floating in the water). In addition it does not explain the rotation.

Looking for an answer:

Up until today there is no explanation based on physics for the Pilsglass experiment of Dr. med. Herbert Koerner.

Explanation based on quantum mechanics:

In quantum mechanics the role of the observer and his influence on the results of measurements continues to be discussed controversially. Nobel prize winner Eugene Wigner (1902 - 1995) speaks about waves of awareness that have the capacity to influence quantum-mechanical wave functions. The Pilsglassexperiment demonstrates, that different observers can an produce differences in the amplitudes of rotation. This remains an open question for quantum physicists.

Technical background of the Pilsglas-experiment:

The Pils glass experiment, a modification of the Cavendish experiment, it comes to mass dynamic comparative measurements with two or more separate axes of rotation. The in water baths centered free-floating cylinder glasses take over the function of a  multiaxial mass dynamic torque  comparative spirit level . "Dynamic torque" means that the amount of the angle and the length of time with which to move the dormant cylinder glasses, information about the mechanical torque acting there.

Medical background of the Pilsglas-experiment:

For many years I have been working on the control- and regulation- mechanisms of the human body. I have been searching for the causes of information transmission between humans that takes plac outside the five senses. For me as a Medical Doctor and engineer it does not suffice to believe, I need to know. As man consists of 70% water, it is natural for me to demonstrate this with water as medium – through the “Pilsglassexperiment”.