For the first time the existence of an unknown energy regulation at the cellular level can be demonstrated by the proof of  NONMATERIAL PROCESS OF REGULATION* *(patent pending), with a biologically active information field in humans.

Microphones“ in the Sinus sagittalis superior  ?

Further proof of a non material regulation process in humans:

The clinician triggers with his hand on the scalp of the resting patient a „morse“ signal in the region of the Sutura sagittalis . When the clinician moves away from the patient, the latter continues to feel the morse signal in the extremities, mainly in his toes and in the tips of the fingers. After this the clinician negates the signal unilaterally by means of a counter impulse in the atlas region. The impulse signals can also be triggered without contact in a distance of 2-3cm from the skin. A  two-year control study in my surgery confirms these results.  Within the scope of  swimming research there has been video documentation of  a series of tests with athletes. The question is whether the anatomical area of short term memory has been stimulated by the impulse technique.

Anatomy books demonstrate to us, that in the area of the sinus sagittalis superior there are knobs or parts of the brain in the shape of a microphone (Granulatioarachnoidealis) in the left and right halves, respectively. It is known that through these “mini microphone” knobs, fluid hormones of the brain is led into the venous pool. 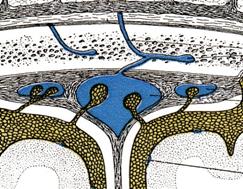 With regard to human cybernetics it could be argued, that the location for storing the impulse signals can be found in the two lateral ventricles. Another question is whether the „microphones“ in the sinus sagittalis superior are the  receptors for gravitational waves that relay feedback signals from the cells as final  energy users.

In terms of human cybernetics a certain logic suggests that the cell as final energy user sends a “double-message” with the regulatory signal for fluid hormones production and  for energy fluid hormones transport  in a single impulse.

A biocybernetic analysis of the cardiovascular system underconsideration of an optimal physical hemodynamics.

When studying the current textbooks of physiology on the cardiovascular system, one finds that the description correctly deals with the technical elements of fluid mechanics, air vessel effect of the blood circulatory system and electromagnetic control signals.

However, if one tried to construct a cardiovascular system following these “building” instructions, one would discover that in terms of physics and cybernetics not a single drop of blood would flow through the blood vessels. What could hence be wrong with mainstream academic medical thinking on the cardiovascular systems?

It is always assumed, that the cardiovascular system functions as a system of pressure distribution, although it has been calculated that the heart despite its small size has to supply an area of 4000 to 7000 sq. m exchange transfusion ofblood. It is true that from a biomechanical perspective it is a mixture of an aspiration and pressure system, where the cardiovascular system in terms of cybernetics is regulated as an aspiration system (better pull system).

That this is technically feasible is demonstrated in an impressive manner by the solutions found for the construction of the TRANSRAPIDSYSTEM. Through refined cybernetics the levitation train is pulled via support .magnets through a magnetic travelling field on its track. The speed can be continuously regulated by varying the frequency of the alternating current. If the direction of the travelling field is reversed, the motor becomes a generator which brakes the vehicle without any contact. The braking energy can be re-used and fed back into the electrical network.

In this context a comparison comes to mind, whether our blood too is pulled in astable way with the perfect technique of a quantum mechanic “suck-scew-waves” (pulse). Such fluid mechanics make it possible to direct blood particles in the vessel fluid from A to B through control signals based on human cybernetics. The relevant control impulses are processed through the closed network endothelial cells of blood vessels with a total length of 40.000 to 65.000 milesgravitation charge and are radiated as synchronised cellcore(information)signals by the cells. The enormous logistical achievement of hemostasis could thus find a logical explanation.

Such a cellular regulation is not possible according to the hypothesis of an unstable blood pressure distribution system supported by the mainstream of the medical world.

From the perspective of an engineer shows us the nature of bionics, or in functional anatomy, that they are always with a technically perfect solution.

In the literature of quantum mechanics is about the possibilities biokybernetischerapproaches little to be found. The Nobel Prize winner Eugene Paul Wigner (1902-1995), speaks of awareness waves, which have the ability quantum wave functions to influence.

The expanded and unified quantum field theory of the German physicist Burkhard Heim postulates that every material object in its space has a immaterial mirror component in the “information space”). This means, that all material processes in their space run at the same time in the non material “information space” and vice versa. Based on the interdependencies of both spaces a constant exchange of information is possible and takes place.

Unfortunately Heim does not explain how and where the physical transposition (exchange) of the information takes place.

My experiment with the PILSGLASEXPERIMENT demonstrates that water plays a key role in the relationship between material physics and non material biophysics.

The measuring method for a non material regulation process (NICHTMATERIELLEN STEUERUNGSPROZESSES) which I have developed, provides proof for the “phenomenon of constant information exchange” described by Heim.

The cybernetics of the endothelial cells

The exposed position of the endothelial cells within the range of embryology, anatomy, as well as the pathophysiology caused me to analyze the human-cybernetic processes.

My five-year basic research permits the conclusion that we have threeconnected  circulatory systems: the blood system, the lymph system and the brain fluid system. In combination, these three systems enable the human-cybernetic system. This cybernetic system provides the overall control system of our bodies. Special characteristics of this control system permit variable signal speeds for time control of these processes..

Independently, endothelial cells operate both internally and externally to process data. External quantum mechanical signals are detected and converted to data which are then read and transmitted internally by physiological process that are generally accepted.

That means that also the brain, heart, lung and intestine, etc., are all subordinated to the endothelial cell system.