THE TSUNAMI-POTENTIAL IN A WATER GLASS

The massively effective thrust force (tsunami potential) for centering the cylinder glass (Fig. T8) presumably occurs via the increased energy potential of the water molecules of an elasto-dynamic tensegrity grating formation of the surface tension (Fig.T9) and is completely independent of the gravitational force, the earth's magnetic field and the electromagnetism.

The Tsunami potential with the example of a cylinder glass

The massive centering of the cylinder glass in a Pilsglas (Figures T1-T4), filled with 0.3 liters of water, at which the water level about 2 mm above the vessel edge (fig. 4), shows a smal impression, if the free energy inherent of a several 1000  square kilometer water volume breaks out, with a Increase in the water level about 500 mm (Figure T7) which can be activated by a sea quake.

The tsunami potential, a quantum electrodynamic Casimir force, which propagates over a hydrogen bridge tensegrity grid?

A tsunami is apparently triggered whenever a sufficiently large water column in the repulsive and attraction force direction (RAK = Lennard-Jones potential) is accelerated with a critical oscillation potential during a seaquake (Fig. T7) As in the figure (Fig. T9), the energy potential of the seaquake is probably stored in the activated water column via a tensegrity lattice formation of the water molecules. With a further vibration of the earthquake plate, energy potentiation can occur by depolarizing the entire Tensegrity grid water column and triggering the tsunami wave.

The figure T5 is intended to show that even monster shafts with different wind direction can   the Tsunami-RAK wave simply go through the wind waves. The wind waves that develop on the surface are always decelerated by the earth's gravitational force in the course of the expansion, quite in contrast to the tsunami wave, which can not be stopped in the medium of water.

In the ocean surface tension zone, the activated repulsion attraction field of the air / water interface medium sucks the tsunami wave through the ocean.

What has the lamella gecko and the tsunami in common? 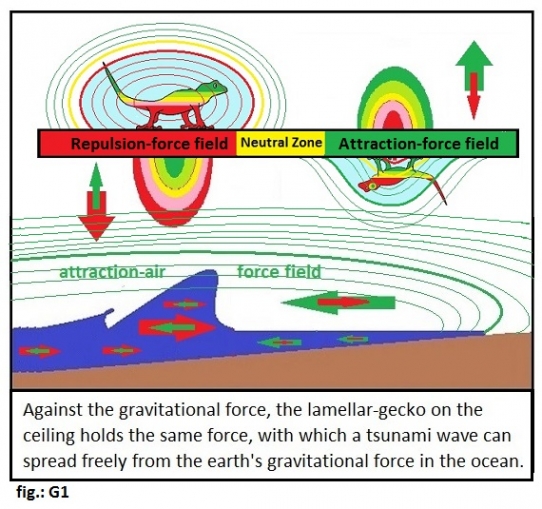 This is at the same time an explanation, why by a tsunami the water go  back to several hundred meters from the coastal line. Here, the repulsive potential (Pauli force) pushes the attraction potential (van Der Waal force) before (Fig. T7) and thus follows the intermolecular interactions of the Lennard Jones potential. The cause of these forces is the subject of quantum mechanics.

The go in front attraction force field (van der Waal) of the interface medium air / water vapor is apparently perceived by animals at an early stage. 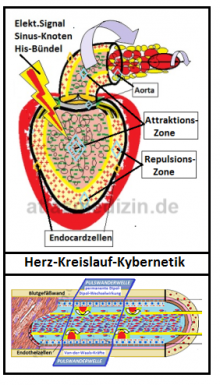 In the case of extreme powers of living beings, e.g. The chameleon with its extreme tongues acceleration, the sailfish at 110 km / h and the sperm whale with a diving depth of 3000 m, the nature of this "tsunami potential" uses biocybernetically.

Also, our cardiovascular system would flow no drop of blood without the repulsion attraction force field RAK of the water

Evidence in the VIDEO: in progress

The Lennard-Jones potential describes the interactions of two neutral particles.  At a simple level, two interacting neutral atoms are subject to two opposing forces: firstly, they are weakly attracted by van der Waals forces; secondly they are repelled by Pauli repulsion. It is known that the van der Waals forces decay proportional to the sixth power of the separation and that the effects of the Pauli repulsion decay exponentially.

Why the lamella gecko can run on the ceiling

The biocybernetic switching (dorsal /ventral) of a repulsive force field into an attraction force field of the geckos body, can be interest for medical Paraplegia research. 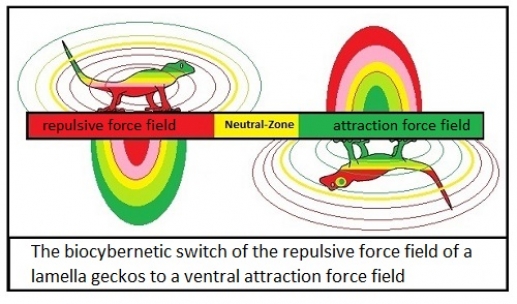 Like the trembling eel, which can generate current up to 200 volts up to 50 amperes over a head positive pole and a caudal minus pole outside its body, the lamellar gecko uses the same technique to increase its repulsive/attraction force field. As a result, it is possible to activate quantum electrodynamic Casimir forces in the interfacial tension zone (ceiling wall versus gecko feet, tail and belly side).

Neuropysiologically, however, is the central question as to how the gecko can switch the attraction and repulsion force during the running
A very interesting subject for cross-cutting research!

In a publication of the OUP 2012 under the title:

I said to the dicussion:

"... whether a high-energy impact pulse in the lower vertebral segments,  a biocybernetic short-circuit, of the asymmetry energetic control system of the mirror DNA [1]of the left and right half of the body, a paraplegia can trigger...