Is the basis of microbiological cybernetics the water at the cell boundaries, which enables signal control functions in the body of living beings with a tetragonal repulsion attraction force field (RAF)? 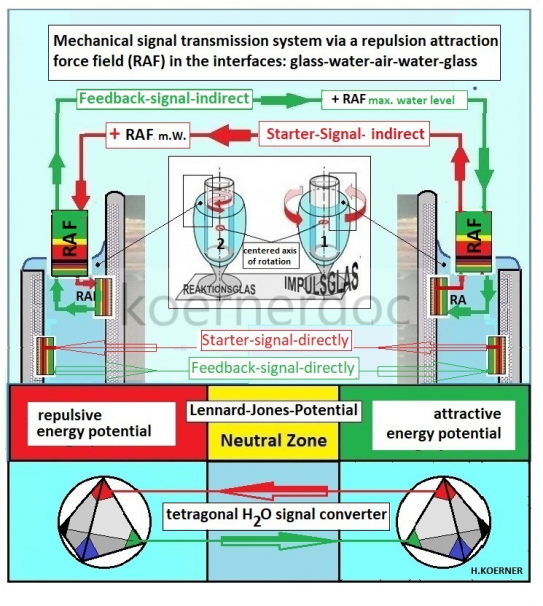 Can a closed water jacket at the boundary surface of inorganic and organic matter create a repulsion attraction force field (RAF) as a signal converter? (see graphic)

Would that provide the bio-cybernetic possibility of sending and receiving mechanical or non-material information signals?

Does the centering of the Kölsch glass essentially result from the maximum increased water level of the water-air boundary surface with the maximum RAK and is the horizontal mass attraction of glass 1 and glass 2 thereby canceled?

Is the RAF a tetrapolar water compass that is responsible for aligning the two glass with each other in the final phase of commuting?

Does the RAF water compass have a geometric water memory?

2. Questions about signal transfer from cells:

Do all living beings work with a repulsion attraction force field (RAK), which in its simplest form is designed as a reflective protection zone beyond the cell boundaries?

Can a signal converter as described above carry out a complete exchange of information from cell to cell?

Is a coupled signal transfer possible via cell-water-air-water-cell?

Does the closed RAF water jacket work at the boundary surface of a cell as a bio-cybernetic signal converter and is therefore in direct signal contact with the DNA?

And what effects would this information transfer have on psychology?

Does an interaction of non-material signals occur at the RAF boundary surface of inorganic (TT-Ball) and organic (experiment-observer) matter?

Do the two sense organs nose and skin work with a bipolar RAK signal transfer like eyes and ears?

3. Questions about the RAK in closed systems of living beings (from the cardiovascular system to the  cell):

Can an electrical reversal of polarity at the interface between the vessel wall and the inner cell wall trigger an increase in the repulsion force of the RAK for a short period of time?

Can this lead to an explosive increase in the distance between the blood cells and the vessel wall?

Can the endothelial cells on the inner walls of the vessels and the endocardial cells of the heart be the cybernetic trigger of this polarity reversal?

Is the boundary surface RAF decisive for the approx. 50 atmospheric explosive increase in the internal pressure of the coronavirus?

On the case of the Parisian biomedical scientist Jacques Benveniste, the Nature editor-in-chief John Maddox and James Randi. (1988)

A video camera recorded the test procedures. Even in a shielded steel safe with a distance of 5 meters between the Pilsner glasses, both free-floating glasses commute to the standstill. It turned out, however, that the fluctuations in movement turned out differently depending on the presence of the viewer. If a certain person was in the room as an observer, the experiment failed.

In the subsequent discussion it was agreed that people with their RAK skin-air interface can manipulate such experiments in a positive as well as in a negative direction.

In 1988 the biomedical scientist Jacques Benveniste was on the right track.